How blend your own music files into RadioWeave

I own lots of music. I love that music. Just because I'm listening to podcasts and weather and tweets and friends does not mean I don't also want to listen to my music.

So I configure RadioWeave to play a song from my own music library every few tracks.

Two Methods for adding your music into your radio weave:

The latest RadioWeave iPhone app (available at the store here) contains this option to blend your on-device music library into the RadioWeave experience.

The second method for adding your music library is with a helper tool we're working on called RadioWeaveMyMusic (RWMM). This is an application for Windows or Macintosh that will keep a rotating portion of your local music cached on the RadioWeave servers. RWMM doesn't manage artwork or ratings yet, and isn't very pretty, so we don't consider it complete. But even in this form it is quite useful so we're making it available for feedback.

The RWMM AIR application may be downloaded here. (If you don't have Adobe AIR installed, see here.)

When you run RWMM on your computer you'll get a screen like this: 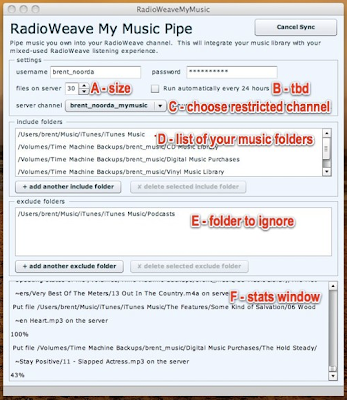 Notes:
If you run RWMM on your local computer every few days you'll hear a fresh sampling of the music you own mixed in with the rest of your radio content.

If you have questions or suggestions for RadioWeaveMyMusic, please email feedback@radioweave.com.
Posted by Brent at 10:43 AM No comments:

RadioWeave iPhone/iPod version 1.2 is now available in the app store here. With this version we have achieved a significant milestone in the mobile streaming experience… or should I say a 272-milestone: the final QA test before submitting this version was a taxing 272 mile drive through cell-coverage hell using a first-generation iPhone.

The San Francisco Bay Area’s AT&T cell network is notoriously bad. Last weekend I drove from home to a relative’s Oakland apartment across the bay, then down 101 to Monterey, then up the coast back to Oakland through SF and another bridge, with a couple of passes through the Alameda tunnel for good measure. RadioWeave played for me, uninterrupted, the entire time. At no time was there a 3G connection, sometimes there was an Edge connection, sometimes GPRS, and quite often no connection at all (especially through the mountains and along the coast). Long periods averaged close to 20 kbps, and too often it was zero, but RadioWeave just kept playing and playing.

Immediately after the trip I called Dale, our iPhone programming genius, and said “Ship It!”

There have been other important real-world milestones in the development of RadioWeave. One of my favorite milestones was the first time I could jog for over an hour without realizing I’d been running for so long because our server algorithm delivered just the right mix of talk and tunes that made me forget how long I’d been exercising. (Should I call that a 7-milestone?)

The importance of this 1.2 release, as exemplified by last weekend’s 272-mile test drive, is that this is the first time that RadioWeave could prove itself more reliable than any terrestrial radio option, or any other iPhone option for that matter (except for Pandora - kudos to the developers at Pandora for holding up to the strain against similar tests I’ve performed).

BTW, if you’re a developer of a streaming mobile application, and you want it to run robustly under real world cellular network conditions, I'd recommend doing what we did. First develop a cell-network simulator that mimics slow networks, faulty networks, networks that deliver wrong data, and networks that frequently drop connections at any random point during communication. Second, test your code against that simulated-awful network. Third, put the code into a smartphone and test against the real network but frequently enclose that smartphone in a cast-iron pot for minutes at a time. If that all works, then, finally, take a 272-mile drive with a first-generation iPhone on the Bay Area AT&T cell network.

There are other important improvements in this iPhone release, such bug fixes and new ways to find content based on other listeners, but for me this release is all about that 272-mile drive. If you want personalized streaming social radio on your iPhone, and you aren’t always fortunate enough to be close to an unobstructed 3G cell tower, then RadioWeave 1.2 is the version for you. Get it now, before the app store runs out of copies :-)